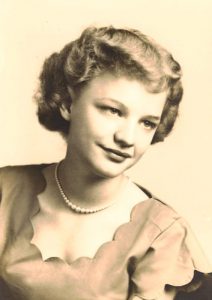 A funeral Mass was held on Wednesday, October 31, 2018 at 10:00 a.m. at the Immaculate Conception Church of Moville with the Msgr. R. Mark Duchaine officiating.  Burial was at Banner Township Cemetery of Lawton.

The Nicklas D. Jensen Funeral Home of Moville is in charge of the arrangements. Online condolences can be made at nicklasdjensenfh.com

Millie was born on April 6, 1933 in Danbury, Iowa to Joseph & Rachel (Livermore) Bollig.  Millie grew up in Danbury and graduated from Danbury Catholic in 1950.

They made their home in Lawton, and to this union three daughters were born.

Millie worked at the Livestock National Bank, raised her daughters, wrote for The Moville Record and helped out at the family-owned gas station on Highway 20.

During her many years of living in Lawton, she was active in Legion Auxiliary, Lawton Flight Club, and The Dancing Grannies and Grandpas.

She is also survived by her brother, Leo Bollig of Mapleton, Iowa.

She was preceded in death by her husband, parents and her foster sister, Rosemary.

In lieu of flowers, the family requests that memorials be made to the Alzheimers Association.