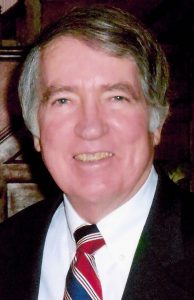 Funeral services will be held at 2:00 p.m., Friday, Nov. 9, 2018 at the Congregational United Church of Christ in Kingsley, Iowa. Burial will be at Kingsley Cemetery. Visitation will be Thursday, 5:00 – 7:00 p.m. with the family present during this time and a prayer service at 7:00 p.m., all at the Rohde Funeral Home in Kingsley, Iowa.

Jerry was born on August 31, 1946 in Davenport, Iowa, to Gerald W. and Barbara (Cornwall) Mueller Sr. Growing up in Carroll, Iowa. He attended elementary schools there and graduated from Kuemper High in 1964.

Following his father’s footsteps, he enrolled in classes at the University of Iowa where he studied until his marriage to Kris Brinkman in 1967. At that time, they moved to Maryville, Missouri, where Jerry attended classes and graduated from NW Missouri State University with a degree in education.

In 1970 they moved to Sioux City, Iowa, where Jerry began his career at Container Corporation of America as a customer service rep. He soon moved into the sales department as a rep for the company and realized very quickly that he had found his calling.

He loved traveling to see his customers and most of them became close personal friends who have remained so throughout the years.

Jerry met the love of his life, Cathy (Hobbs) Artz, in 1986. They were united in marriage on May 16, 1987. They enjoyed spending time together at home, cruising in their ’60 Corvette, cheering their beloved Iowa Hawkeyes in football and basketball seasons, dining with friends, and spending time with family.

In 2008 Jerry retired from Smurfit Stone, successor to CCA, after 39 loyal years. He immediately realized that retirement was not for him. At that time, he formed his own brokerage business partnering with Packaging Corporation of America in Omaha, Nebraska.

Jerry loved his career in sales and always took great pride in his work making sure that his customers’ needs were met by going above and beyond and putting them first.

Jerry was great conversationalist and never met a stranger. His gentle, kind, caring compassionate personality led him to a lifetime of friendships and his generosity knew no limits. He was very proud of his loyalty to the Sigma Chi Fraternity.

He was preceded in death by his parents, brother, John, and mother-in-law, Keith Hobbs.

In Lieu of flowers, donations can be sent in Jerry’s memory to the Congregational United Church of Christ, Kingsley, Iowa or Pancreatic Cancer Action Network.