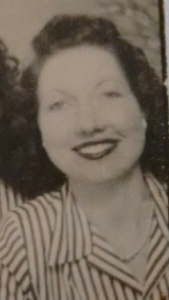 Hertha Maxine Klotz Saxton, the daughter of John and Alice (Mesenbrink) Whited, was born on September 22, 1926, in Denison, Iowa. She was baptized and confirmed in Friedens Evangelical Church in Schleswig.

Her childhood years were spent in the Schleswig area, where she attended school.

On January 8, 1949, she was united in marriage to Donald Klotz. They were blessed with five children: Leo, Leon, Linda, Larry, and Lori.

The family farmed in the Schleswig area until 1954, when they moved to the Quimby area where they farmed until 1974. They then moved to an acreage near Washta, Iowa. On September 3, 1976, Donald passed away and

Hertha kept busy raising her family. She worked at the Quimby Cafe, did private housecleaning jobs, and was a homemaker health aide for Mid-Sioux for 12 years.

Following her retirement, she was united in marriage to Ben Saxton on March 19, 1988. She spent seven wonderful years with Ben. They enjoyed traveling, dancing, and many other things.

Ben passed away on April 24, 1995. Following Ben’s passing, Hertha remained in Quimby until December 1, 2008, when she moved to the Garden’s Assisted Living in Cherokee.

Hertha was active in church activities, crafts, enjoyed traveling, cooking, baking, and tending to her flowers. Most of all, she loved the time spent with her family and friends. On Tuesday, October 30, Hertha passed away at a Sioux City hospital at age 92.

She was preceded in death by her parents; two husbands, Donald Klotz and Ben Saxton; one sister, Betty Dethlefson; one brother, Roy Whited; and one half-sister, Mildred Rusch.

She will lovingly be remembered by her children, Leo Klotz and special friend Kim from Panora, IA; Leon Klotz of Cherokee, IA; Linda and Gary Kessler of Storm Lake, IA; Larry and Darla Klotz of Lamar, CO and Lori and Darrell Woltman of Aurelia, IA; 8 grandchildren; 12 great-grandchildren; one sister, Gladys Rusch of Schleswig, IA; one brother, John Whited and his wife Marjorie of Denison, IA; three half-sisters; Ruby Ann Beerman and Jolene Carstensen of Denison, IA and Darlene Justice of Irwin, IA; one step-daughter, Sharon Hempel; two step-grandchildren; and other relatives and friends.