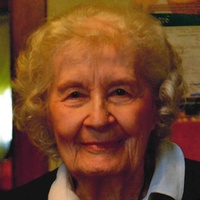 June Janell Shatka, age 92 of Sioux City, went home to heaven to be with her Lord Jesus Christ on November 1, 2018.

A burial service was held on Saturday, November 3, 2018 at Waterbury Funeral Service of Sioux City with the Rev. Quentin Vaughn officiating.

June was born on May 24, 1926 in Cherokee County, Iowa to Beryll and Lura (Fogleman) Williams of Washta, Iowa. She graduated from Washta High School and later from the Nettleton Business College.

She was united in marriage to Stephen Gordon Shatka on August 12, 1950 in Sioux City, where they made their home for over 61 years. They also resided briefly in South Sioux City, Nebraska.

June was employed by JC Penney, Ray-de-o-Ray Record Store, Fanny Farmer Candies, and the Woodbury County Department of Social Welfare, from which she retired in 1988.  Her hobbies and interests included bicycling, bowling, painting, baking and spending time with her family.

She was fervent in prayer, and an ardent giver to many Christian and Jewish causes, as well as to our veterans. She had been a member of the Church of the Open Bible, pastored by the Reverend David Headley.

She was preceded in death by her parents, her husband and her sister, Roberta Louise Boothby of Holstein.

The family wishes to thank Hospice of Siouxland for providing comforting care in her last days.