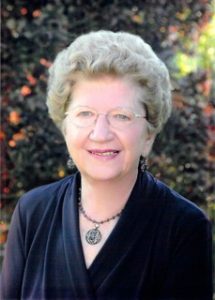 Patsy R. Perkins, age 91, of Lawton, passed away on Wednesday, October 31, 2018 at the Bickford Assisted Living of Omaha, Nebraska.

A funeral service was held on Saturday, November 10, 2018 at 11:00 a.m. at the Bethel Lutheran Church of Lawton with the Rev. Robert Zellmer officiating.  Burial was at Banner Township Cemetery of Lawton.

She met a handsome young soldier named Russell Perkins who was returning from the war in Europe in the spring of 1946. They were married in September 1947 and a son, Jim, was born the following September.

Once returning to Lawton, she became active in the community, joining Bethel Lutheran Church. She also worked part-time at local phone company for over 20 years.

Pat moved to Omaha in November of 2011 to be closer to family and the health care she needed.

Pat is preceded in death by her mother and father, Glen and Helen Robinson; and her brother and sister-in-law, Har and Jan Robinson.

Memorials can be directed to St. Jude Research Hospital for Children.