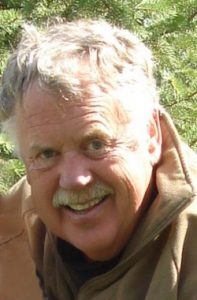 Online condolences may be offered at www.meyerbroschapels.com. Meyer Brothers Morningside Chapel is assisting the family with arrangements.

Teddy started school in Pierson, Iowa before they moved to Colorado Springs, Colorado in 1955. They lived there for two years and then moved back to Iowa.

He attended school in Bronson before they settled in Lawton in 1960.

He was proud to have held many high school football records, sometimes forgetting to mention it was the first year of the program.

He was also the first-ever Homecoming King at Lawton High School before graduating in 1967.

Following high school, Ted attended the University of South Dakota, where he was a Phi Delta Theta and a Stroller.

In true Ted style, while bowling for beers in The Varsity bar, he met his wife and partner of 35 years, Marge, at a Phi Delta Theta/Chi Omega mixer. They were married August 22, 1970, in Yankton, South Dakota.

In 1970 Ted joined the Iowa Army National Guard eventually rising to the rank of Spec 5.

During the six years that he spent in the service, he learned to cook. He summed up his time in the Army like this: “In the Army, I never killed anyone, at least not that I know of.”

After graduating from USD in 1972 with a Bachelor of Arts in Studio Art and a minor in Art Education, Ted became an Art Instructor at Earlham Community School in Earlham, Iowa.

Ted and Marge both taught for a few years before pursuing a new job taking them throughout North Dakota and Canada. At that time Ted held the position of Operations Supervisor for Country Kitchen Restaurants, opening new locations throughout the region.

After living in Canada for two years, Ted and Marge moved back to Sioux City and with the help of his family, started Theo’s Steakhouse and Lounge in 1976.

Theo’s, which was open for 36 years, was the anchor that began a restaurant career that spanned for more than 40 years here in Siouxland.

You always knew that when you went to Theo’s you would see Ted. Whether you were a new friend or a regular, Ted made you feel at home.

Being the “Head Bottle Washer” and “PR Man” he would always sit down and talk to you. That is what he loved — taking care of people, giving them great food, great conversation, and great friendship.

During all of this, Ted and Marge raised two children, Tyson who was born in 1974 and Nicole in 1978.

Tragically, Marge was called to Heaven in 2005.

After retiring from the restaurant business, Ted was very proud to be a co-founder of a new environmental based business, Envirotech Systems Inc.

Aside from the businesses, Ted had many other interests. Ted was very proud to be a Shriner like his father, participating as a Flying Fez in which he would fly children to the Shriner’s Children’s Hospital.

He always loved the outdoors. His lifelong hobbies of hunting and fishing with friends always led to some great stories.

In retirement, he found time to reignite his passion for art through his drawing and pottery.

Another lifelong passion of his was traveling. After retirement, he had time to enjoy exploring new places with friends and family, especially with Marla Luitjens.

For the last nine years of Ted’s life, his largest accomplishment and most significant joy came from his two grandchildren.

Whether catching turtles or doing art projects, the sun rose and set with those kids. Often it was hard to determine who the bigger kid was when they were together. He adored every moment he spent with them.

Ted was called to Heaven suddenly on November 7, 2018, as a result of a pulmonary embolism.

The outpouring of appreciation, memories, love, and support from the community has been unbelievably generous. Ted would have been humbled.

“The Best Steakhouse in Town Is Out of Town.”  Always.

In lieu of flowers, memorials will be in care of the family.