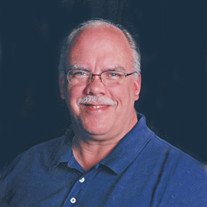 Jon was born in Sioux City, on Jan. 31, 1963, the son of Donald F. and Betty L. (Shaver). He attended Sioux City Public Schools and graduated from East High School with the class of 1981.

During his high school years, he worked at the Southern Hills Hy-Vee. After graduation, he worked at Swift and Company. He then worked at Campus Stylist for four years.

Jon returned to Hy-Vee at the Southern Hills location before he started working for Palmer Candy Company, where he served as manager of the Palmer Old Time Candy Shop for the past 22 years.

Jon was united in marriage with Shelly A. McQuade on May 24, 1991 at Church of the Nativity in Sioux City. This union was blessed with three children.

He was a former clown with the Abu-Bekr Shrine. He also was a past member of the Cosmopolitan Club. He was a member of the Sioux City Elks Club and was an active member of Sunnybrook Community Church, where he volunteered his time and always helped with the pancake breakfast at the church.

Jon enjoyed interacting with the international students that were attending Morningside College. Jon enjoyed helping in the community in any role.

He was a generous individual who believed in being everyone’s friend and who welcomed friends and family into his home.

Jon always had a great laugh and was more than willing to share a joke with every person he came into contact with.

Jon was preceded in death by his parents; his stepfather, Vernon Tott; his stepbrother, Richard Tott; his brother-in-law, Dan Jensen; and his father-in-law, Douglas McQuade.

In lieu of flowers, memorials may be made to the family for a suitable memorial in Jon’s memory to be decided at a later date.