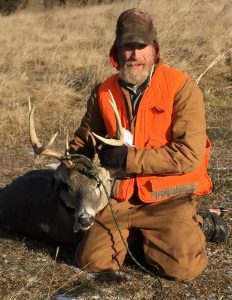 Tony D. Putzier, Sr., the son of Franklin, Sr. and Bonnie (Mason) Putzier, was born on December 9, 1966 in Des Moines, Iowa. The family lived in Des Moines, Council Bluffs, and Battle Creek, Iowa before settling down on a farm outside of Anthon, Iowa.

A hard-working man, Tony started out traveling with the McDermott Family Shows Carnival. In the off-season, he started working for IBP.

His career ended due to an injury sustained on the job which left Tony disabled.

Tony had the joy of being blessed with five children: Isaac, Paul, Tony “T.J”, Sandra, and Rachel.

He had a passion for the great outdoors, hunting & fishing, canoeing, and ATV’s.

He would show his love of hunting through his numerous pieces of artwork, using skulls and bones of woodland animals along with his own design and creativity for those to enjoy. He also liked to tinker, along with caring for his lawn and garden. But most of all, he treasured the moments spent with his family.

He was preceded in death by his father, Franklin H. Putzier, Sr; his daughter, Rachel Putzier; maternal and paternal grandparents; his brother-in-law, Jerry Barcus; and aunts, uncles, and cousins.