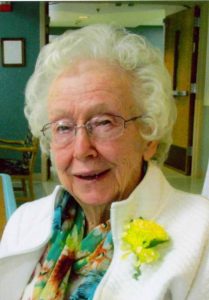 Helen was born April 26, 1925 on a farm south of Cleghorn, Iowa to Robert and Ruth (Mitchell) Ferris. She was the eldest of seven children.

Helen graduated from Aurelia High School in 1943 and went on to Buena Vista College. She earned her teaching certificate and taught in Afton and Tilden Townships for four years.

Helen married William Downey on June 1, 1948 at her parent’s home in Grand Meadow Township. They farmed and raised stock cows/calves for over 50 years in the Grand Meadow area. Together, they raised five children.

Throughout the years, Helen enjoyed her children’s 4-H activities, baking, reading, and finding teachable moments. Helen was an avid gardener until the age of 89.

She was a member of Meadow Star United Methodist Church and was very fond of her church family.

Helen cared deeply about everyone. She was and always will be an enduring light in our lives.