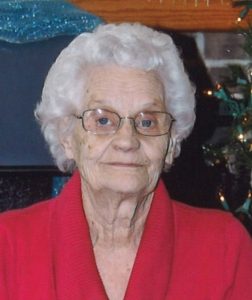 Frances Niemeier, age 91, of rural Holstein, passed away on Saturday, December 8, 2018 at the Cherokee Specialty Care of Cherokee.

A funeral service will be held on Wednesday, December 12, 2018 at 10:00 AM at the St. Paul Evangelical Lutheran Church of Holstein with the Pastor Bob Lewis officiating.

A visitation will be held on Tuesday, December 11, 2018 from 5:00 PM – 8:00 PM at the Nicklas D Jensen Funeral Home of Holstein. Burial will be at the Holstein Cemetery of Holstein.

The Nicklas D. Jensen Funeral Home of Holstein is in charge of the arrangements.  Online condolences can be made at nicklasdjensenfh.com.

Lillie Frances Benson daughter of Berger & Anna (Svenson) Benson was born in Alta, IA on March 6, 1927. After graduating from Alta High School, she worked at Poller Dairy a local ice cream shop in Alta as a bookkeeper & clerk.

She was united in marriage to Louis Lloyd Niemeier at Trinity Lutheran Church in Alta on Feb 10, 1946. They lived & farmed north of Holstein. This marriage was blessed with 5 children: David, Daniel, Donald, Dean, & Deanna. She has six grandchildren & eight great – grandchildren.

She enjoyed growing many houseplants & having a flower garden. She did a lot of canning & freezing of produce. As a girl she was known as “Alta’s Little Carpenter”. She enjoyed doing a lot of woodworking. She was a very good seamstress & loved to crochet as well.

She was preceded in death by her parents & her seven siblings and their spouses, Bertha (Edwin) Axelson, John Benson, Millie (Paul) Grienke, Oscar (Lillian) Benson, Geneva (Jake) Martin, Sylvia (Johnny) Stoner and Donald (Arlene) Benson. Her husband in 2005, son David in 2001, and son Donald in 1954.