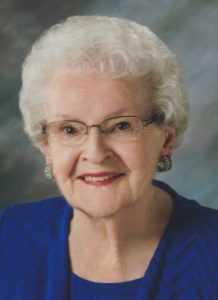 Ruth Clare Morrissey, 92, of Le Mars, formerly of rural Kingsley, was united in heaven with her husband, Bob, on Thursday, December 6, 2018 at Park Place Estates in Le Mars.

Mass of Christian Burial was Monday, Dec. 10, 2018 at All Saints Catholic Parish – St. Joseph Church in Le Mars.   Sympathy can be extended thru www.rexwinkelfh.com.

Ruth, 10th child of George and Mary Johanna (Carel) Sitzmann, was born Dec. 28, 1925 in Plymouth County, outside of Kingsley.  She attended

Rural No. 3 School in Plymouth County during elementary grades. She graduated from Mount Marty High School in Yankton, SD in 1942.

After graduating from Mount Marty Junior College in 1944, she graduated from Siena Heights College in Adrian, Michigan in 1946 with a Bachelor of Arts.

She taught 7th and 8th grade English for one year in Remsen, and then junior high English for four years in Forest City, Iowa.

While in Forest City, Ruth met and fell in love with Robert (Bob) Morrissey of Leland, Iowa.  They married June 20, 1951 at St. Joseph Neptune Catholic Church in Hinton.

Ruth was a member of St. Joseph’s Neptune Catholic Church in Hinton, Iowa and the Ladies Altar Society.  She served as Eucharistic Minister for many years. She was a member of Catholic Daughters of America in Le Mars. Ruth adored her family, grandchildren, and great-grandchildren.

Growing up on the family farm was exciting with 8 kids.

Ruth and Bob enjoyed watching their children grow and become successful in the own lives while maintaining their strong family values.

Ruth enjoyed gardening, especially her large strawberry patch where she made her famous strawberry jam. She liked crocheting, reading and sharing her pie-making skills.  She had special memories of many winters in Arkansas and travels with her daughter and son-in-law.

Ruth was especially proud of receiving the Century Farm status in 2008.

Ruth was the ultimate teacher, always giving teachable moments to her kids and grandkids.

A special event was a trip with her sisters to the Vatican where they had a personal visit with Pope Plus XII.

Memorials can be made to Hospice of Siouxland.