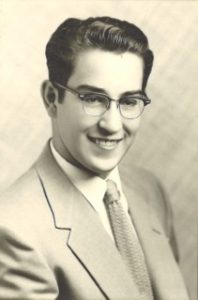 A funeral service was held on Friday, December 14, 2018 at 10:00 AM at the Nicklas D. Jensen Funeral Home of Moville with the Rev. Barb Spaulding officiating.  Burial will be at a later date.

Max L. Tomlinson was born August 7, 1938 to Clifford and Elva (Wilson) Tomlinson in Moville, Iowa.  He attended school in Bronson and then graduated from Lawton High School.

After graduation, he went to California and St. Louis, Missouri for a short time to work, then returned to the Moville area to do farm work.

Max was united in marriage to Patricia Boyle on December 27, 1958.  To this union, five children were born: Brian, Tim, Jerry, Tammy and Scott.  They raised their family in the Moville area.

Through his career, Max worked at Hunting Hatchery, Siouxland Scale, Moveall Trailers and Prince Manufacturing.  He retired in 2002.

Max loved family gatherings and spending time with grandchildren. He enjoyed telling stories about his childhood.  He loved fishing and camping and was a skilled woodworker, making furniture for his children.

Max took great pride in caring for his acreage for 55 years, creating a golf course quality lawn in which he was very particular.

He had a great sense of humor until the end.