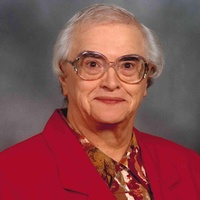 Rayma Marie Pritchett was born February 4, 1927 in Bristow, Nebraska, the daughter of Marion and Lena (Albright) Pritchett. As a young girl, she and her family moved to northwest Iowa.

Rayma graduated from Anthon High School in 1944. She continued her education at the National Business Training School in Sioux City, Iowa.

Rayma lived in Sioux City from 1949 to 1962 before returning to Moville. Rayma was a bookkeeper at Jones Distributing Company of Sioux City, Iowa for 29 years until her retirement on April 25, 1986.

Rayma was a member of the National Credit Association.

She and her sisters were members of the Moville Evangelical Church for many years. She later attended the Climbing Hill Baptist Church.

Rayma is survived by her two nieces, Patricia (Melvin) Chaffin and Deronda (Jim) Davis, both of Fort Smith, Arkansas.

She is preceded in death by her parents; one brother, Leslie Prichett; and two sisters, Mildred Prichett and Lillian Dexter.