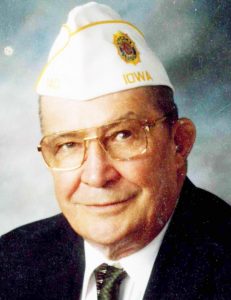 Visitation with the family will be 2:00 to 4:00 p.m. Saturday, December 29, with a prayer service at 3:30 p.m. followed by military rites conducted by American Legion Nash Post 140 in Kingsley, all at the Rohde Funeral Home in Kingsley. Online condolences may be sent to www.rohdefh.com.

David was born on June 24, 1927, in Grand Meadow Township, to Glen and Vera (Robertson) Klingensmith. He graduated from Grand Meadow High School in 1945.

David was drafted by the U.S. Army during World War II and served until his honorable discharge. Following his discharge from the Army, he returned to the Grand Meadow area.

Over a period of years, he was a trucker, farmer and packing house employee. Following retirement, he worked for several local businesses.

He was a volunteer for Meals on Wheels and enjoyed volunteering at the Soup Kitchen in Sioux City. He was an active member of American Legion Nash Post 140 in Kingsley.

He held local, district and state offices for the American Legion ending as the commander of the State of Iowa.

David was also chairman of the committee for Wilson’s Insurance Company. He was a 50-year member of Salem Lutheran Church, where he served on the church council as well as being superintendent for Sunday School.

David was extremely busy most of the time, but when the opportunity presented itself, he always enjoyed traveling, fishing, visiting people and family gatherings.

He was preceded in death by his parents; his first wife, Joan; three brothers: Dick, Roger and Scot; and one sister, Joan.

In lieu of flowers, memorials may be directed to the American Legion Foundation, Salem Lutheran Church or the Plymouth County Conservation Board.