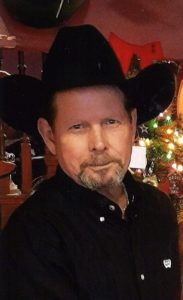 Thomas A. Turnage, 61, of Correctionville, passed away on Wednesday, December 26, 2018 at his home in Correctionville.
A prayer service will be held on Sunday, December 30, 2018 at 2:00 p.m. at the Nicklas D. Jensen Funeral Home of Correctionville with Clif Cockburn officiating.  There will be no burial.  A visitation will be held one half hour prior to the service starting at 1:30 p.m. at the Nicklas D. Jensen Funeral Home of Correctionville.
Thomas Alan Turnage was born on November 26, 1957 to Bill Turnage and Carol (Nelson) Padgett in Odessa, Texas.
He was united in marriage to Kim Thomas on July 23, 2017.  Tom was employed at Holstein Electric as an electrician.  He has lived in the Correctionville area for the past five years.  Previously he lived in Des Moines and Odessa, Texas.
Tom enjoyed hunting, fishing, riding horses and golfing with his Holstein Electric family.  He loved spending time with his family and finding new adventures with his wife.  Tom participated in traveling rodeo where he did bull riding and saddle bronc.  He also did team roping with his brother Billy.  Tom enjoyed participating in fishing tournaments as well.
He is survived by his wife, Kim Turnage in Correctionville, IA; mother, Carol Padgett of Texas; son, Chance Turnage of Des Moines, IA; stepsons, Jeff Wortman (Kara), Corey Wortman, Cody Wortman (Kayla) Wortman, all of Correctionville, IA; seven grandchildren, all of Correctionille, IA; sister, Elaine Burns (Ricky) of Texas and brother, Billy Barnes (Dinny) of Texas.  Tom is also survived by his ever-loving pot-bellied pig pig, his Labrador, River and his cat, Peanut Butter.
Posted in Obituaries