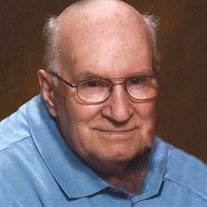 Don was born in Little Egypt, now known as Climbing Hill, Iowa, on March 22, 1936. He attended schools in Sloan, Iowa.

He was united in marriage with Elizabeth A. Malloy on Aug. 29, 1959, in Sioux City. Don had made Sioux City his home for the past 51 years.

He was employed at Balue Brick in Sergeant Bluff, then Iowa Beef Processors, Midwest Culvert, Dakota Pork and Schuster Trucking and the Sioux City Community Schools, retiring in 2009.

He was a former member of St. Joseph Catholic Church in Salix and a current member of Mater Dei Parish Immaculate Conception Church in Sioux City.

Don was preceded in death by his parents; two brothers, Dwight and Richard; a half brother, William Linderman; infant brother, Johnny; infant sister, Franny; and a sister, Esther Albright.