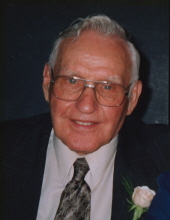 Eldon Herman Jurgen Wiese was born at home in rural Cushing, Iowa, on April 14, 1922. He was the fourth of six children born to Herman and Christina (Clausen) Wiese. He attended country school in the rural Cushing area.

Eldon married Eva Pohlman at the Trinity Lutheran Church in Sioux City, Iowa, on June 6, 1945. The couple shared 67 ½ years of marriage together. They were the proud parents of seven sons: Steven, Alan, Randall, Eldon B., Monte, Grant and Dale.

Eldon was a hard worker. He farmed from 1947-1961 around Aurelia and Early, Iowa. Later he moved to Schaller, Iowa, where he was employed by several businesses.

Eldon had a mechanical aptitude, and he used those abilities while working at the Schaller Consolidated Popcorn Company until retirement in 1989.

Eldon had an ear for music and enjoyed playing his accordion throughout life. He played in a dance band, at family gatherings, and at the nursing home.

He was skilled at woodworking and valued the opportunity to share his creations with family.

Eldon moved to Mapleton, Iowa, after retiring. He was a member of St. John’s United Methodist Church. He was a dedicated father who took great pride in his sons.

He was preceded in death by his parents; his wife Eva Wiese (Dec. 2, 2012); a son,, Steven Wiese; a great-granddaughter, Karlie; a brother, Alvin Wiese; and sisters Hermina, Edna Steen and Luella Beers.