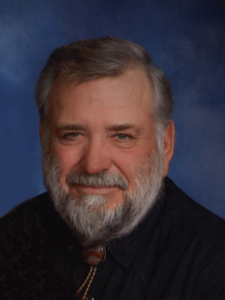 Franklin “Fritz” D. Wigand was born May 19, 1949 to Frank and Betty (Livermore) Wigand in Anthon, Iowa.  He graduated from Anthon-Oto High School then earned his AA at Sioux Empire College in Hawarden.

Fritz joined the Army National Guard #133 and was activated at the beginning of 1969.  He served in the Vietnam War and returned home in November of 1969.

Fritz was united in marriage to Linda King on September 15, 1972 at Grace United Methodist Church of Correctionville.  To this union three children were born. Together they raised their family in the Correctionville area.

Fritz started working in 1976 as a heavy equipment operator for Woodbury County on secondary roads and did this until his retirement in 2014.  His true passion though was farming.  He enjoyed having pigs, sheep, cows, chickens and riding horses.

He was a member of Grace United Methodist Church, where he served on the administrative board, was a trustee, and sang in the choir.

A proud veteran, Fritz was a member of the VFW Sioux Valley Post # 1750 and the American Legion Mumford-Moon Post #79 of Correctionville.

He was also a member of the JC’s.  He enjoyed participating in tractor pulls and drag racing.

Fritz also liked to play cards, especially cribbage and euchre.  He was talented musically, and once played the guitar in a band.  Fritz knew no strangers; everyone he encountered was a friend.

Fritz is survived by his wife, Linda Wigand of Correctionville, IA; daughter Dawn and husband Travis Cavenee and their children Austin and Audric; daughter Denice and husband Joe Redenius and their daughter, Alicia (Taylor) Luvaas, Tige, Tayden and Adlyr; son Derek and wife Kayla Wigand and their son, Mason; and great-grandchildren Colt, Cash and Caelor Luvaas.