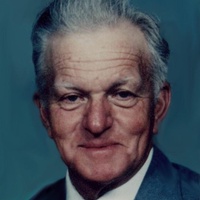 Jim was born September 6, 1929 in Moville, Iowa, the son of Howard & Ila (Sherwood) Bleil.  He grew up in Moville graduating from Moville High School in 1948.

On June 26, 1949 Jim was united in marriage to Donna Hansen. After their marriage they made their home in Moville, Iowa, where they raised their family.

Jim was a long-time business man in the Moville/Kingsley area.  He farmed and fed cattle for many years, co-owned Davy’s and Jim’s Feed Store, and for over 30 years, the Bleil & Chapman Sale Barn.

He was on the Woodbury County Fair Board for many years and was honored as a long-time member.  He was a founding member of the Tri State Ropers Club and participated in many rodeos.

Jim was very supportive of his children and grandchildren in sports and other activities they were involved with.  He was very fond of spending time with his family and friends, and he always enjoyed playing cards.

Jim is also survived by one brother, Don (Bev) Bleil; one sister, Darlene Davis; and a sister-in-law, Evie Bleil, as well as many cousins, nieces and nephews.

He was preceded in death by his parents; his wife, Donna; his daughter-in-law, Sally Bleil; a sister, Dorothy Petersen; a brother, Robert “Bob” Bleil; brothers-in-law, Robert “Davy” Davis and Norm Petersen; and a sister-in-law, Mary Bleil.