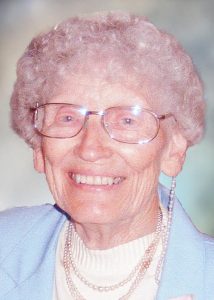 Online condolences may be sent to www.opsahl-kostelfuneralhome.com.

She moved to Yankton in 1944 to attend Sacred Heart School of Nursing. She served as a nurse with local hospitals and nursing homes.

She married Bernard Hunhoff on August 20, 1946. They farmed near Utica and had eight sons. All through life, she tended to the needs of the sick and the poor.

After Bernard died in 1982, she moved to Yankton. She wrote Grandma’s Scrapbook for The Yankton County Observer for 20 years.

Margaret treasured her family, her Catholic faith and the written word.

Those values sustained her through difficult times, especially after the death of her young son Steven in a farm accident in 1952.

Margaret was preceded in death by her husband, Bernard Sr.; their son, Steven; her parents; and seven siblings: Harold, Frank, John, James, Andrew, Rose and Mary.