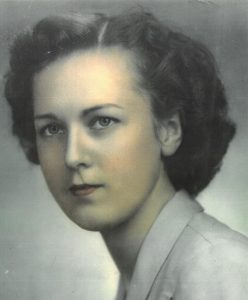 Arrangements are under the direction of Meyer Brothers Colonial Chapel.

Maude was preceded in death by her husband, the Rev. Ervin B. Schemmel. The couple was married May 28, 1952, in Dubuque, Iowa. They were the parents of five children.

Her parents were Lehndert and Maude (Hines) Franzen. She was baptized and confirmed at Immanuel   Lutheran Church and graduated from Coleridge High School.

Maude trained to become a registered nurse at the Lutheran Hospital in Sioux City. She moved to Dubuque and worked at Finley Hospital there.

Following her husband’s death in 1979, Maude moved from Cushing, Iowa, to Sioux City where she worked as a nurse at Westwood Nursing Home.

Later she worked at the Correctionville Public Library, and she worked into her eighties at M&M Copy Quick in Sioux City.

Her home was a welcoming way station for her many grandchildren and great-grandchildren after school, music lessons or the pool, and headquarters for every family party.

She was a member of St. John’s Lutheran Church in Cushing.