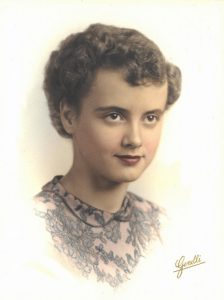 A funeral service will be held at 7:00 P.M. Thursday, January 17 at Meyer Brothers Morningside Chapel. Visitation will be Thursday from 5-7 PM at the funeral Home.

Private burial will be at Arlington Cemetery in Moville, Iowa.  Online condolences may be made to www.meyerbroschapels.com.

Nadine was born in Bonilla, South Dakota. The family moved to Lawton, Iowa when Nadine was a young girl.

They lived in Lawton until moving to Moville when Nadine was in high school.  She graduated from Moville High School in 1951 and soon married Ronald D. Clark of Moville. Ronald and Nadine raised four children in Moville.

Nadine was a stay-at-home mother who volunteered enthusiastically for the Woodbury County Swimming Program and the local Boy Scouts troop.

She loved gardening, reading, visiting Lake Okoboji, and taking care of her grandkids and her dogs.  She was a member of Trinity Lutheran Church in Moville.  Nadine moved to Sioux City in 2008.

The family would like to extend their gratitude to the staff at Whispering Creek Memory Care Unit for their kind, compassionate care over the last two years.