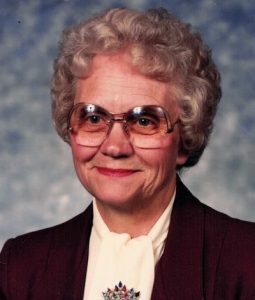 Darlene will be cremated with a Celebration of Life planned for early summer.

The Maurina-Schilling Funeral Home in Owen is entrusted with the arrangements.   Family and friends may express condolences online at www.maurinaschilling.com

She worked for Woodbury County Engineer office at the Courthouse in Sioux City.

On February 13, 1946 she married Emil Ray Looker and lived in Owen, Wisconsin, where they raised 8 children.

Darlene was an active member of the United Church of Christ in Owen and a member of American Legion Auxiliary since 1951.

She was extremely involved in her children’s education, holding the office of president many years in Parent/Teacher Organization; leader of each; the Cub Scouts, Girl Scouts, and 4-H.

She loved seeing all her friends and neighbors who came to buy Christmas trees from the family tree farm. Even with this busy schedule, Darlene sewed clothes, quilted, knitted, crocheted, and belonged to a card club.

She was a great cook and enjoyed entertaining friends and family.

She considered herself fortunate to have seen the west coast and Hawaii.

A special heartfelt thank you to Dr. Wirtz, Dr. Justus and Dr. Yanke, the Nursing Staff and Caregivers on 2 East at Clark County Rehab and Living Center for their care and compassion for Darlene Looker.