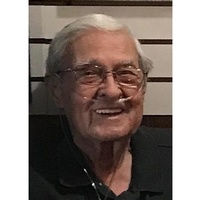 Burial was in the Quimby Cemetery at Quimby, Iowa.

There were military rites at the graveside by the Quimby American Legion, Cherokee V.F.W. and the Cherokee American Legion. Online condolences can be left at www.boothbyfuneral.com

Jim served his country in the United States Army during the Korean Conflict as a forward observer and was honorably discharged as a Sergeant.

Jim had worked as a heavy equipment operator and a salesman throughout his life, retiring first from Simonsen Industries and then Schoon Construction in Cherokee.

Jim always had a joke or a story to tell and he never met a stranger. He has friends all over the world. He spent the last few years connecting with relatives around the globe and enjoyed talking with them on the phone.

When he would post on Facebook, he always enjoyed seeing how many “likes” he received and how many different countries they came from.

Jim and Ethel spent mornings at the Cicero Coffee Company, where owners Jerry and Brandy had a sign made to reserve their favorite table.

He enjoyed traveling to new places, going to the Indy 500 race, watching Indy car and NASCAR on TV, photography, genealogy, politics, and spending time with his grandchildren and great grandchildren.

Jim was a Life Member of the Second Indianhead Division Association and served as President from 1998-2000.

He and Ethel made many friends though the organization and through the years enjoyed taking grandchildren with them for the annual reunions around the country.

He was also a member of the American Legion.

He was preceded in death by his parents; a daughter, Laurie Warrender; a brother, John Warrender; a half-brother, Alec Warrender; and a half-sister, Mae Murdock.