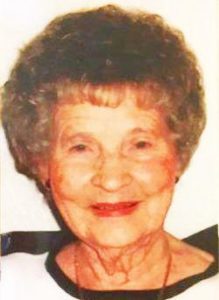 Teresa Catherine (Koch) Lux, 93, of Tempe, Arizona, formerly of Hornick, passed away unexpectedly but peacefully in Tempe on January 11, 2019.

Services were held on January 18 in Tempe.

She grew up in Jackson, Nebraska, where she attended St. Catherine’s Academy.

In 1947, she married Albert Lux. They farmed in Hornick until 1973, when they retired to Arizona. For many years, she worked as a bookkeeper at McGuirk & Taylor Feed and Seed, McGuirk Skelly Oil, and the Key Drug Store in Sioux City.

Teresa loved baking and washing dishes, playing cards and Yahtzee, and keeping in touch with all of her cherished family and friends.

She is survived by her daughters, Mary Anne (Roger) Kates, and Alberta Lux (Jim Coffey); four grandchildren; four great-granddaughters; her loving nieces and nephews; and numerous cousins and friends.

She is preceded in death by her husband, Albert; her parents, Anthony and Mary (McGuirk) Koch; six siblings; and a nephew.