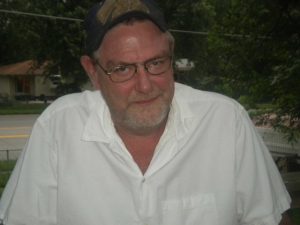 A Celebration of Larry’s Life was held Tuesday, January 15, 2019 at 6:00 p.m., with family receiving friends one hour prior to the service, all at Braman Mortuary (Southwest Chapel)

Larry was born in Fort Dodge, Iowa on August 23, 1962. He grew up with his three sisters and parents in the small town of Schaller, Iowa, but lost his youngest sister Julie at the age of 9. After graduating from Schaller high school in 1980, he attempted to follow his dream of joining the military, but fell short due to hearing loss.

It was unknown to him at the time, but it may have been meant to be, as it led him to attend college at Iowa Central, where he met the love of his life Marcia. After graduating in 1982 with a trade degree, Larry and Marcia married later that year on September 18th.

They welcomed their first child Heath in 1983, followed by their twins, Jarred and Jamie in 1986. Larry loved being a dad and was involved in everything from coaching little league, to helping with Cub Scouts and high school football.

Larry loved working with tools and made this his life work. He started out in construction and maintenance and then moving into sales, with one of his proudest accomplishments being awarded a Home Depot Legend Award for developing a device for a customer that made it possible for their disabled child to write. His story was memorialized with a display in The Home Depot Legend Museum in Atlanta, Georgia.

He also obtained his goal of owning his own business, opening The Coast Saloon, before ultimately returning to handyman work.

When he wasn’t working, Larry loved fishing with his friend Bill at the bullhead hole, finding something to renovate in the house, reading anything whenever he could, and of course, watching his Iowa Hawkeyes on Saturday afternoons.

However, he was probably never happier than when he was playing and wrestling with his three grandchildren: Makenzie, Carson, and Jaxson. He was the proudest Grandfather there was.  He loved showing them how to use tools, sneaking them a cookie before dinner, and bragging about them to whoever would listen.

No one could ever argue he had his own unique style and he will be greatly missed.

Larry was preceded in death by his father, Lawrence Ober, and his sister, Julie Ober.