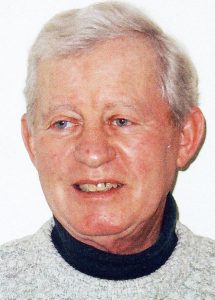 A celebration of life service was held at 10:30 am at the United Methodist Church in Hornick, on Monday, January 28, 2019 with Pastor Catie Newman and Pastor Karen Handke officiating. Burial was at Little Sioux Township Cemetery in Smithland.

In lieu of flowers the family requests that memorials be given to the United Methodist Church in Hornick or the United Church of Christ in Rodney.

Meyer Brothers Morningside Chapel is in charge of arrangements. Online condolences may be expressed at www.meyerbroschapels.com

Don was born February 23, 1936 in Sioux City Iowa, and grew up on a farm near Obert, Nebraska. Donnie later moved to Hornick, Iowa, and graduated from high school in Hornick in 1953.

Donnie married Gracia Aldrich June 9, 1957 in Rodney, Iowa. Donnie and Gracia were married for almost 62 years. They lived most of their lives in the home Don built near Rodney on the Aldrich-Cleveland family farm.

Donnie enjoyed music, especially singing in church and gospel groups. He loved sharing his talents entertaining residents of Pleasant View Nursing home. Donnie also enjoyed coffee and visiting with his friends and always had a story to tell. Some of those stories were even true.

Don worked a number of jobs over the years, usually choosing to work outside building things.

In early years, Donnie worked on construction operating heavy equipment on a variety of sites including construction of Interstate 29. Most of his life Don worked as a carpenter and owned his own business constructing and remodeling homes.

Throughout most of his career, Don was involved in all aspects of home building: carpentry, cabinet making, electrical, plumbing and heating. In later years, Don worked for a few years as a sales representative for AY McDonald in Omaha and as an electrical engineer for GOMACO in Ida Groove.