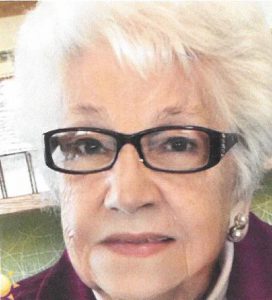 Cremation was performed as per her wishes. A celebration of her life in Scripture and song will be 10:30 a.m. on April 27, at Riverside United Methodist Church, with the Rev. Elizabeth Tucker officiating.

Alice was born on May 8, 1919, to August and Bertha (Heidemann) Steppat, in Mills, Nebraska. She was the even dozen out of 13, as she referred to herself.

Alice grew up on the farm, which she loved, with her five brothers and seven sisters. She helped them do the chores, sometimes getting in Dutch with mama for eating more berries than picking them.

After attending country school, she went to work at Mays Department Store, where she met the love of her life, Dale W. Church.

They were married on November 30, 1941 in Stanton, Nebraska. To this union were born a son, Alan Dale, and a daughter, Sharon Ann.

Rev. Dale Church and his wife Alice served the Moville Eldridge United Brethren Church in the 1950’s and 1960’s.  Their son Alan graduated from Moville High School during that time.

Alice took great pride in being a good wife and mother and she was both. She was the Naval wife from 1942 to 1945 during World War II, then later as the preacher’s wife for many years until they retired. She and her husband served various parishes in the area.

Alice always enjoyed the many church activities she participated in especially singing whether it was in church or to her children, grandchildren or great-grandchildren. They will all remember, “I love you a bushel and a peck.”

Alice had various hobbies including crocheting and entertaining. She especially enjoyed making fried chicken, cinnamon rolls and best-ever Christmas sugar cookies for her family and friends.

More than anything, Alice loved the Lord and served him faithfully. Her husband and family were the center of her life, always there for them, assisting in anyway she could.

Those who preceded her in death were her husband, Dale; her parents; five brothers; seven sisters; a grandson, David; a great-granddaughter, Ashlie; and numerous other relatives and dear friends.

Special thank-you for all the care and kindness shown by the staff at Westwood Specialty Care, Care Initiatives Hospice, and Rev. Elizabeth Tucker, as well as lay persons from Riverside United Methodist Church.