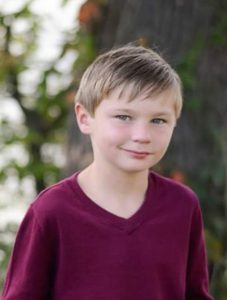 Funeral services were 10:30 A.M. Saturday, February 2, 2019, at the Whiting Christian Church in Whiting, Iowa, with Pastor Josh Weece officiating. Music selections included “Jesus Loves Me,” “Tears in Heaven,” and “One Call Away.”

Arrangements were under the direction of Rush Family Care Service, Onawa, Iowa.

Blair was born August 4, 2010 in Sioux City, Iowa the son of Zackary Newlon and Erica Johnson. He was raised in Anthon and Whiting, Iowa until recently moving to Ida Grove, where he was currently in the second grade.

Blair attended the Whiting Christian Church in Whiting, Iowa, where he enjoyed spending time with other kids and learning about Jesus.

Blair was the “Man of the House.” He enjoyed fixing things and helping his mom around the house. He enjoyed building projects with his Legos and going fishing.

He loved Lightning McQueen from the movie “Cars” and playing video games like Pac-Man. He was thrilled with a robot he received at Christmas.

He protected his mom, two sisters, and brother, and always put them first. When the accident happened, he made sure his sisters got out first. His love for his family is undeniably the most terrific quality Blair possessed.

Blair was a true superhero to the utmost infinity. His smile and affection for others are precious gifts that will live on in the hearts of those he treasured here on earth.

He was preceded in death by his father, Zackary Newlon, who also passed away in the accident; two great-grandfathers, Roger Kinney and Vincent McDermott; and several other family members.