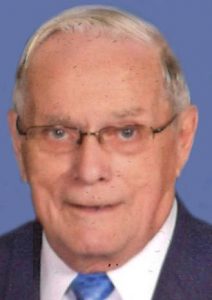 Everett T. Marsh, 89, of Sioux City, died Friday, Feb. 15, 2019, at Embassy Rehab and Care Center in Sergeant Bluff.
Service will be 10:30 a.m. Wednesday at Redeemer Lutheran Church. Burial will be in Memorial Park Cemetery. Visitation will be 4 to 8 p.m. Tuesday, with the family present 6 to 8 p.m., and a prayer service at 7 p.m., at Christy-Smith Funeral Homes, Morningside Chapel.
Everett Teddy Marsh, son of Ted and Anna (Johnson) Marsh, was born Sept. 13, 1929, in Ortonville, Minn. He grew up on a farm near Mapleton, Iowa. Everett joined the U.S. Army in 1951, and was stationed in the Motor Pool in Austria during the Korean War. He was honorably discharged after serving two years.
On Nov. 21, 1954, Everett was united in marriage with Evonne Ball in Climbing Hill, Iowa. The couple moved to Omaha, where Everett went to auto body and fender school. They moved back to Sioux City, where he was employed with Charlie Miller Body Shop and then Brouillette Body Shop. He retired in 1994.
Everett was a member of Redeemer Lutheran Church where he ushered and served on the finance board for many years. He enjoyed woodworking and tinkering with various things. Everett was very proud of the antique cars that he helped restore after his retirement.
Everett is survived by his wife, Evonne; children, Don (Jane) Marsh, Julie (Steve Graham) Gilbert and Mark (Rose) Marsh, all of Sioux City; five grandchildren, Brian (Claire) Marsh, Scott Marsh, Amanda (David Garcia) Gilbert, Stacie (Reid Beneke) Marsh and Kaitlyn (Jeremy Dahl) Marsh; a great-grandchild, Caylix Garcia; a sister, Lorraine Weinbrandt of Denison, Iowa; a brother-in-law, Darold (Sharon) Ball of Sioux Falls, S.D.; and many other relatives and friends.
He was preceded in death by his parents; and six siblings, Rosella, Earl, Norman, Darlene, Eleanore and Dale.
The family has requested that memorials be directed to Redeemer Lutheran Church.
Posted in Obituaries