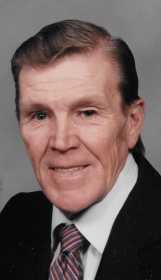 Funeral services were held Tuesday, February 12 at 10:30 a.m. at the Washta United Methodist Church in Washta. Pastor Barb Dinelli officiated. Burial was in the Grandview Cemetery at Quimby, Iowa.

Monteno was born on December 23, 1932 in Ida County, Iowa to H. Arnold and Marvel (Filer) Leonard. He attended Douglas Country School through the 8th grade and graduated from Quimby High School in 1951.

He was married to Beverly Zupp on July 21, 1951 at the Methodist Parsonage in Quimby, Iowa. Monteno had farmed most of his life and enjoyed raising livestock on the family farm.  He had also been an insurance salesman and built storage bins. He had resided all his life on the Leonard family Century Farm south of Quimby, purchased by his grandparents in 1906.

He was a member of the Washta United Methodist Church, a longtime member of Farm Bureau (of which he had served as President for three years), a member of Quimby Town & Country Club and Progressive Cattle Company for 12 years. He also served on the Willow School Board.

He was preceded in death by his parents; a son, Zane Leonard; a daughter, Gina Edwards; and two brothers, Amos and Wayne Leonard.