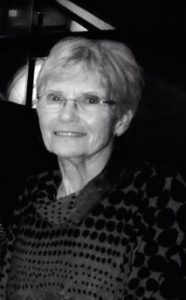 A funeral Mass was held on Tuesday, February 19, 2019 at 10:30 a.m. at the Immaculate Conception Church of Moville with Msgr. R. Mark Duchaine officiating.  Burial was at the Arlington Cemetery of Moville.  Online condolences can be made at nicklasdjensenfh.com.

Mary was united in marriage to Leo Dean Miller on May 2, 1959 at the Immaculate Conception Catholic Church in Moville.  To this union, two children were born.

Mary enjoyed being a homemaker for her family.

Mary was a member of the Immaculate Conception Catholic Church where she was active with the Queen of Peace and regularly served as Eucharistic Minister.

She was a member of the Meadows Country Club and volunteered throughout the community in many ways.

She enjoyed playing the piano, shopping, reading, bowling and annual trips to the fair with her great nieces and nephews.

Mary enjoyed traveling, especially abroad and for the annual mother-daughter trips.  She was the matriarch of the family, organizing dinners, holidays and family reunions. She had a way to always make everyone feel special.

Mary was preceded in death by her parents and a sister, Jane Arkfeld.

In lieu of flowers, memorials may be made to Catholic Charities or Queen of Peace.