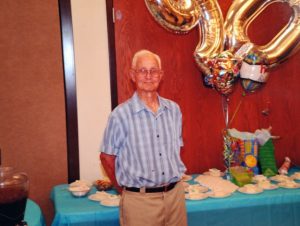 Services for Vern Darrell Knudsen, 95, who died Thursday, February 14, were held at the Holly Springs Bible Fellowship on Wednesday, February 20  at 10:30 a.m.

Pastor Jim Thomas of the Holly Springs Bible Fellowship officiated at the services.  Burial will take place at the Greenwood Cemetery in Pierson.

Mr. Knudsen had lived at his home in Moville for many years, but in recent years, he lived in the Kingsley Nursing and Rehab Center.

Vern Knudsen was born on July 11, 1923 in Kingsley, the son of Andrew and Vera (Pierce) Knudsen.  He attended  Kingsley country schools.

Vern married Margaret Faulkender on June 6, 1944, and the couple celebrated their 73rd anniversary last year.  He and Margaret had three children: Sharyl, Denise and Tod.

For many years he and his family attended the Pierson Christian Church, where Vern served as a deacon, a board president and an elder.  Later he attended Holly Springs Bible Fellowship.

Vern and his family enjoyed traveling and camping during the summer months.  He also enjoyed maintaining a large family garden.  He and Margaret lived on his family farm until they moved to a home in Moville in 1960.

Vern worked for many years as a lineman for the Woodbury County Rural Electric Cooperative. He later worked on the maintenance staff at Woodbury Central Community Schools in Moville.

He loved his position there, and he worked until he was 85 years old.  He particularly enjoyed helping decorate the school during holidays and celebrations.  He also enjoyed collecting mechanical banks during his life.

He was preceded in death by his parents; his parents-in-law, Ray and Ethel Faulkender; three brothers: Howard, Russell and Glenn; and three sisters: Thelma, Ruth and Vera.