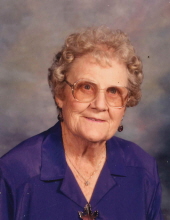 Dorothy Carpenter, age 102, of Mapleton, Iowa, passed away on Saturday, March 2, 2019 at the Sunrise Retirement Community of Sioux City, Iowa.

A Funeral Service will be held at 10:30 a.m. on Friday, March 8, 2019 at the Armstrong – Van Houten Funeral Home of Mapleton, Iowa. Rev. Jason Van Wyk will officiate. Committal will follow in the Mount Hope Cemetery of Mapleton, Iowa.

The Armstrong – Van Houten Funeral Home of Mapleton, Iowa is in charge of the funeral arrangements. Condolences may be sent online to their website, www.armstrongfuneral.com.

Dorothy B. Carpenter was born on June 20, 1916 in Tipton, Iowa — one of six children born to Emil and Helen (Jorgensen) Von Vett. At the age of 4, Dorothy moved with her family to Sioux City, Iowa, and Dorothy was baptized in the Kelly Park Baptist Church.

She grew up in Sioux City and attended Grant Sioux City Public School.

On December 31, 1934, Dorothy married Lawrence E. Carpenter in Elk Point, SD. The couple moved to Salinas, California in 1935 during the Great Depression when jobs were scarce.

While in California, the couple were delighted to welcome their daughter Karen. The family returned to the Oto-Danbury area and went into farming. After retiring the couple enjoyed snow birding at Sun Life Retirement Center in Arizona.

Dorothy and Lawrence shared 60 years together before he passed in October of 1995. In the same year, Dorothy moved into Mapleton, Iowa. A devoted Christian, Dorothy was a member of the United Church of Christ. She lent her talents making quilts for the blind at the Lutheran Church in Mapleton and also helping with luncheons.

A homemaker, Dorothy was an accomplished cook. Her daughter fondly remembers three full meals a day cake as dessert every day and cookies for lunch, and pie on Sundays. In her youth she enjoyed bowling and playing pool. Dorothy liked playing cards, attending church, and visiting and playing cards daily with the elderly at the local nursing home.

In 2015, Dorothy moved into Whispering Creek Assisted Living in Sioux City, Iowa. In February of 2019, at the age of 102 1/2, after her health started to decline, she was moved to the Sunrise Retirement Community of Sioux City where she lived up until the present.

A special thank you to friends along the way, and special friends Carol Dose and Shirley Hesse who lent a helping hand when Dorothy was in need.

Dorothy was preceded in death by her parents Emil and Helen Von Vett; sisters Lucile Von Vett (at the age of 6) and Elsie Zortman; and brothers Robert and Vincent Von Vett.

Memorials may be directed to the family and will be distributed to charities.