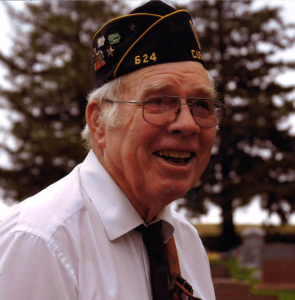 A funeral service was held on Tuesday, March 5, 2019 at 10:30 AM at the St. John’s Lutheran Church of Cushing with Pastor Tami Groth officiating.  Burial was at the Cushing of Cushing with military rites conducted by the F. Roger Baumann Post #624.

Lewis S. Reyman was born January 23, 1933 in Cushing, Iowa to Frank and Ethel (Tuschoff) Reyman.  He was a graduate of Cushing High School.  Upon graduation he joined the Army.  He served as a Communication Specialist from 1951-1953 in the Korean Conflict.

He was united in marriage to Virginia Groepper on June 24, 1956 at St. John Lutheran Church in Cushing.  Together they raised their three children on their Century Farm southwest of Cushing.

Lewie was a member of the F. Roger Baumann American Legion Post #624 of Cushing and a member of St. John Lutheran Church.

He enjoyed playing cards and going on tractor rides.

Lewie was preceded in death by his wife of 49 years, Virginia; his parents, Frank and Ethel Reyman; his step-mother, Rossie Reyman; his parents-in-law, Lester and Hilda Groepper; a sister, Ruth Daehn; and two brothers-in-law, Stanley Heilman and Richard “Nipper” Daehn.