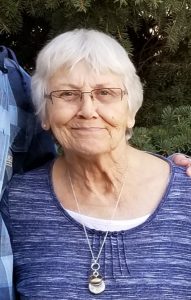 Visitation will be 5:00 – 7:00 p.m. Thursday, with the family present during this time and a Scripture wake service at 7:00 p.m., all at the Rohde Funeral Home in Kingsley, Iowa.  Also, there will be a Rosary prayed at 5:00 p.m. Thursday at the funeral home.

Patricia “Pat” Mary Montange was born August 10, 1941 in Minneapolis, Minnesota, the daughter of Fred A. and Antoinette M. (Sengir) McGuire.  She grew up in LeSueur, Minnesota, graduating from LeSueur High School in 1960.

After high school she attended a technical college, where she learned to be a telephone operator.  After that she married Keith M. Berg. They had two sons, Courtney and Jason Berg.

Patricia later met Levern Montange while she was manager at the Palmer House Restaurant in Sioux City Iowa.  They were united in marriage November 9, 1991 at St. Joseph Catholic Church located at Neptune, Iowa.

Patricia and Levern made their home outside of Kingsley, Iowa, where they lived many happy years together.  Levern passed away July 9, 2018, after which Pat continued to live at their home until health issues forced her to make other arrangements

Pat worked numerous jobs but the work she most loved was being a volunteer for Hospice of Siouxland, where she touched many lives and many lives were blessed by her gentleness and kindness.

She was a devoted mother, wife, sister and grandmother.  Her grandchildren were the world to her and her to them.

Pat was a member of St. Joseph Catholic Church at Neptune, Iowa until it was closed. She and Levern then became members at St. Michael’s Catholic Church in Kingsley, Iowa.

Pat was preceded in death by parents; husband Levern; a brother, Fred McGuire and a sister, Barbara Monopoli.