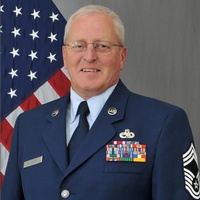 Funeral Services were held at 2 p.m. Friday, March 8 at Waterbury Funeral Service of Sioux City. Burial will be in Memorial Park Cemetery, with Military Rites provided by the U.S. Air Force and the 185th Air Refueling Wing.

Dan was born November 5, 1959 to Mary Jane (Allman) and Larry Bumsted. He grew up on a farm near Oto, Iowa and attended school at Anthon-Oto High, where he excelled in sports and drama.

Dan married Kris Edlund in 1984 in Sioux City. They later divorced.  He had one son, Brayden Daniel in 2003 with Robin Niday.

After high school, he worked as a mechanic with his uncle at Bumstead Repair in Mapleton, Iowa, and drove bus for the Maple Valley and Anthon-Oto school districts.

He went on to work on a survey crew with IDOT and farmed near Sergeant Bluff until 1986. He entered the Air National Guard in 1981 and worked as an aircraft mechanic on A7s, F16s, and KC135s.

He retired in 2014 as a chief master sergeant.

Dan was involved in regional roping, (head and heel) and chuck wagon racing. He enjoyed coyote hunting and growing tomatoes, peppers and cucumbers.  He was a huge Hawkeye fan.

He was a member of and former commander of the American Legion Post 662.