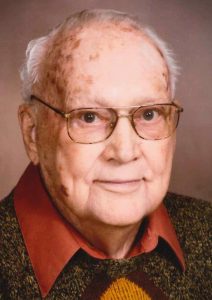 Leonard F. Maier, 95, of Mapleton, passed away on Saturday, March 9, 2019, at the Lakeside Lutheran Home of Emmetsburg, Iowa.

Leonard was raised in Mapleton and got his education at Mapleton High School, graduating with the class of 1942.

After graduating, he enlisted into the U.S. Army and was part of the USASC (United States Army Signal Corps) during World War II.

When the ASTP was terminated, he returned to the USASC and served the rest of the war in the South Pacific.

Upon his honorable discharge, Leonard returned to Mapleton and was united in marriage to Edith Lee on January 27, 1946 at St. John’s United Methodist Church. The couple was blessed with two children, Edward and Nicolett.

During his life, Leonard worked as a bookkeeper, feed salesman, worked at the Mapleton post office, and was a carpenter.

Eventually Leonard and Edith began their own business called Our Nest Egg, where they would get eggs from hatcheries, decorate them and sell them worldwide.

Family was extremely important to Leonard. He and Edith never missed going to an Iowa or Morningside football game to watch their kids play in the marching band.

Leonard was a 73-year member of St. John’s United Methodist Church, a former cub scout and Boy Scout leader, a member of the Loren-Hollister Post #496, the Vesper Lodge #223, and the Mapleton Rotary Club.

He was also a past recipient of the Mapleton Club’s Outstanding Citizen Award.

Those left to cherish his memory include his son, Ed Maier of Emmetsburg, Iowa, and his niece, Carol Crain of Davenport, Iowa.

He was preceded in death by his wife, Edith Maier; his daughter, Nicolett Maier; his parents, Ernst and Della Maier; a brother, Leo (Iona) Maier; and parents-in-law, Ed and Ada Lee.