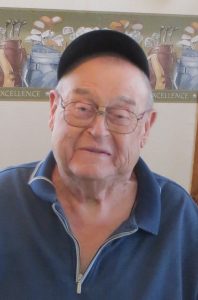 A Funeral Service will be held at 10:30 a.m. on Thursday, March 28, 2019 at the United Methodist Church of Anthon, Iowa. Pastor Sheryl K. Ashley will officiate. Committal will follow in the Oak Hill Cemetery of Anthon, Iowa, with Military Rites Conducted by McNiff Post No. 389 of the American Legion of Anthon.

Conrad Henry Jensen, the son of Henry and Augusta (Schwartz) Jensen, was born on April 8, 1936, in Battle Creek, Iowa. They moved from the farm by Midway to the family farm between Anthon and Oto, Iowa, which his parents purchased from the railroad. He attended Oto School and graduated with the class of 1955.

After graduation, he attended Wayne State College for a short time before enlisting in the United States Army.

On November 26, 1961, Conrad was united in marriage to Judith Ann Hansen in the Anthon United Methodist Church of Anthon, Iowa.

In 1963, Conrad lost his father after a massive heart attack and took over the family farm. Conrad took pride in serving as a Miller Township Trustee.

Conrad enjoyed fishing, squirrel hunting, playing cards and getting together with the local coffee shop group.  His most treasured moments were spent with his grandchildren as they were his pride and joy.

He was preceded in death by his parents, Henry and Augusta Jensen; his wife, Judith “Judy” Jensen in 2010; and his sister-in-law, Norma Jean Paulsen.