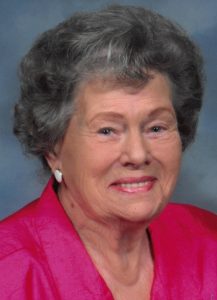 Services will be held at 10 a.m. on Friday, March 29 at Meyer Brothers Morningside Chapel (6200 Morningside Ave., Sioux City). Burial will follow in Memorial Park Cemetery. The family will greet friends from 9 to 10 a.m. on Friday at the funeral home.  Online condolences may be expressed at www.meyerbroschapels.com.

Lois, the daughter of John Russell and Iva Pearl (Nelson) Beachy, was born November 26, 1923, in Hornick, Iowa. Lois grew up in the Leeds area and attended Sioux City Schools.

After attending school, she worked in retail.  During World War II, she worked at Wincharger. During this time, she met Sergeant First Class Robert Gordon Nelson, who was stationed in Sioux City with the Army Air Force.

Lois and Robert were united in marriage Dec. 14, 1944 in Denver, Colorado. This union was blessed with five children. The family made their home in Sioux City.

Lois was a homemaker and helped her husband with his businesses, Fashion Floors and Slumberland.

She was preceded in death by her parents; her husband, Robert; her son-in-law, Kenneth Vogt; one sister, Ruby (Marvin, Sr.) Rodvold; and one brother, Jack Beachy.

Memorials may be directed to Sunrise Retirement Community.