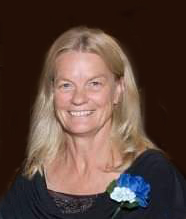 Cynthia Renee Gray, age 62, of Sioux City, died on Tuesday March 26, 2019 at her residence surrounded by her loving family.

Cindy was born in Sioux City, Iowa on February 27, 1957, daughter of E. Wesley and Beverly (Thompson) Andrews. She attended Lawton-Bronson and graduated with the class of 1975.

She was united in marriage with Robert “Bob” Gray on June 28, 1980 and this union was blessed with two children.

She began teaching Special Education at the South Sioux City High School while continuing her education at Morningside College, where she received her Masters Degree in 1984.

She also had taught Driver’s Education in Sioux City and surrounding schools.

Cindy was a member of the Sioux City Public Educators, the National Education Association, and the Rustin Avenue Methodist Church.

She loved her garden. She was known for her sweet corn, salsa, and jelly canning. She enjoyed watching, coaching and participating in many sports, as well as taking care of her horses and being an active member of 4-H.

Cindy’s life will always be remembered and cherished by her husband of 39 years, Bob of Sioux City; her daughter Kalifornia and her husband Sergio Sotelo of Des Moines, Iowa, and her son Rob and his wife Rebecca of Sioux City, and two grandchildren on the way.

She is also survived by her brother, Eron Andrews of Kingsley, Iowa; her sister Chris Goodchild and her husband Klint of Royal, Iowa; and her father Wes Andrews of Sioux City, along with her Matron of Honor and special caregiver for the past week, Therese Jensen of Yacolt, WA, and many extended family members and friends.