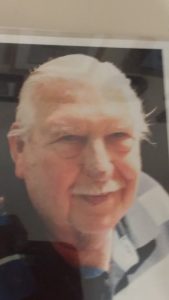 Gary was born August 12, 1929 in Oto, Iowa to Harold Otto Lillie and Rozella May (Downing) Lillie.  He attended East High School in Sioux City, graduating in 1947.

After graduation, Gary spent nearly 10 years in the Air National Guard, seeing active duty during the Korean War and receiving a letter of commendation for his act of bravery.  Gary was honorably discharged in 1958.

On June 28, 1953, Gary was united in marriage to Irma Joy Johnson at the Methodist Church in Moville, Iowa.

Gary was a long-standing member of the Lions Club of Spencer, Iowa, where he held all offices including Regional Commander for two years.  He was also Cub Scout Master and a Jaycee officer.

He won the Lions Club Melvin C. Jones Award. He made a hole-in-one on the Spencer Golf Course.

When Gary wasn’t on the golf course, you could find him tinkering in his workshop as he loved woodworking projects.  Fishing, reading and bowling were also among his favorite hobbies.

Gary enjoyed his career as an insurance/real estate agent. He later owned and operated Lillie Insurance Agency in Spencer, Iowa.