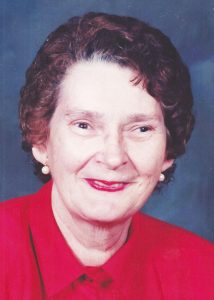 A Funeral Mass was held on Monday, April 8th, at 10:30 a.m. at the St. Mary’s Catholic Church in Danbury, Iowa. Father Richard D. Ball officiated. Burial was in the Grandview Cemetery at Quimby, Iowa.

The Boothby Funeral Home in Cherokee, Iowa is in charge of the arrangements. Online condolences can be left at www.boothbyfuneral.com

Leona was born June 30, 1930 at Sioux City, Iowa to Cyril and Florence (Stewart) Murray. She attended Cathedral School in Sioux City through the ninth grade.

She was married to Carl Simmons on February 2, 1953 at the St. Boniface Catholic Church in Sioux City, Iowa

Leona was a member of the St. May’s Catholic Church and the St. Mary’s Rosary Society in Danbury. She was a housewife and stay at home mother. She enjoyed drawing pictures and spending time with her family.

She had been a resident of Danbury since 1953.

She was preceded in death by her parents; her husband Carl on June 20, 2008; her grandson, Michael Moser; her granddaughter, Melissa Simmons; her son-in-law, Lynn Hamann; and her sisters, Shirley Kincannon and Florence Blair.