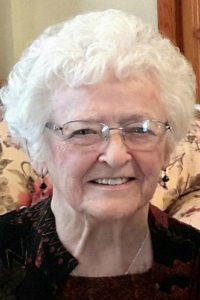 Patricia Wetovick, 87, of Fullerton, Nebraska, passed away Saturday, March 30, 2019, at The Monarch by Eastmont in Lincoln.

Patricia Jean (Reitz) Wetovick was born on June 24, 1931, the 10th daughter of Henry and Elizabeth (Kealy) Reitz. She grew up in Genoa, Nebraska. She attended Genoa Public Schools, and graduated in 1948. She taught rural grade school in the Stromsburg and Osceola areas for two years.

The family lived in rural Nance County north of Fullerton, farming in the Fullerton and Belgrade areas.

She enjoyed baking, cooking, and sewing for her family. She helped alongside June when needed, driving grain trucks in the fall, and helping with planting in the spring.

She was a 4-H leader, taught CCD, and continued to teach by her example throughout her life. She loved friendly competition, exhibiting flowers, baking, and quilts in the County Fair as recently as last year. She challenged her kids and grandkids to the game of Scrabble and many different card games.

She loved flowers and was always amazed how God created so many different varieties when the seeds all looked so similar. She made porcelain dolls for over 25 years, and she enjoyed china painting.

In her later years, she was an avid quilter. Last year alone she made 31 quilts — one for each of her grandchildren.

She is survived by her children: Cyndy (Kenny) Pilakowski of Genoa; Pam Cooper of Moville, IA; and Kevin (Joet) Wetovick, Ken (Karyn) Wetovick, Rick (Marne) Wetovick, and Rod (Penny) Wetovick, all of Fullerton; 31 grandchildren, 51 great-grandchildren; and numerous family and friends.