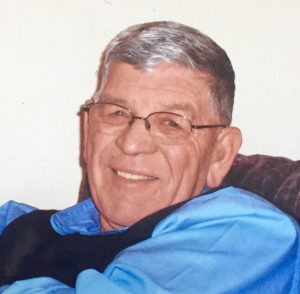 A funeral Mass was held on Thursday, April 11, 2019, at 10:30 AM at the Immaculate Conception Church of Moville with Msgr. R. Mark Duchaine officiating.  Burial was at the Arlington Cemetery of Moville with military rites conducted by the American Legion Wink-Sparks Post #303 of Moville.

Leo Dean Miller was born on December 14, 1936 in Moville, Iowa to Ronald and Glatha (Mullinnex) Miller.  He was a 1955 graduate of Moville High School.

Leo was united in marriage to Mary Germaine (Montang) Miller.  They raised their children, Terry and Katie, in Moville.  Leo was an engineer for the Illinois Central Railroad where he worked his entire 35-year career.

He was a member of the Knights of Columbus and Wink-Sparks American Legion Post #303 of Moville.

Leo never met a stranger.  He was a member of the Meadows Country Club and was proud to have gotten a hole-in-one there on Hole #1, August 9, 2017.

Leo belonged to the Immaculate Conception Cath-olic Church of Moville and volunteered throughout the community in many ways.

Leo is preceded in death by his parents; his wife, Mary Germaine; a special uncle, Norman “Bud” (Kay) Miller; and his other favorite pup, Samantha.

In lieu of flowers, memorials can be made to the Woodbury County Library in Moville or Catholic Charities.