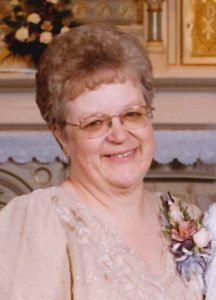 Cheryl A. Schrunk, age 72, of Mapleton, Iowa, passed away on Saturday, April 20, 2019, at the Pioneer Valley Living & Rehab of Sergeant Bluff, Iowa.

A Memorial Service will be held at 10:30 a.m. Friday, April 26, 2019 at the Morningside Assembly of God of Sioux City, Iowa. Pastor Johnny Helton will officiate.

Armstrong – Van Houten Funeral Home of Mapleton, Iowa is in charge of the funeral arrangements. Condolences may be sent online to www.armstrongfuneral.com.

She was raised in Sioux City, Iowa and received her education at Bishop Heelan High School graduating with the class of 1964. After high school, she attended Briar Cliff College graduating with a Bachelor of Arts in Sociology.

On November 30, 1968, Cheryl was united in marriage to Herbert “Allan” Schrunk at St. Boniface Catholic Church in Sioux City, Iowa.

They first made their home in Colorado while Allan was still in the military. During the summer of 1969, they returned to the Mapleton, Iowa area where Allan resumed farming with his dad and brothers.

The couple were blessed with five children: Brenda, Denise, Elaine, Kirk and Keith. Cheryl was a homemaker while her children were growing up.

Later in life, Cheryl was employed in several customer service-related jobs including Gateway, Stream and at a variety of retail stores.

Cheryl was a loving and devoted wife, mother and grandmother. She relished time spent with her family. She enjoyed knitting, sewing, playing cards, reading and watching movies.

Cheryl had a strong and unwavering faith in her Lord. She was an active member of the Morningside Assembly of God where she enjoyed participating in bible studies and helping out however she could.

She was preceded in death by her husband Herbert “Allan” Schrunk; her parents Quinten and Dorothy Vik; uncle and aunt Eugene and Mary McDonald.