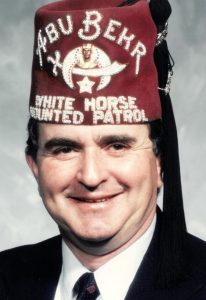 Services were held at 1 p.m. Friday, April 19 at Meyer Brothers Morningside Chapel, with Neil Peck as the officiant. Burial was in Memorial Park Cemetery.

Online condolences may be offered to the family at www.meyerbroschapels.com.

Kenneth was born on Nov. 24, 1941 in Kingsley, Iowa to Lloyd B. and Beulah (Black) Wright. Following graduation, he joined the U.S. Army, giving six years of service.

Kenneth was an active member of the Abu Bekr Shrine, and made a career as a Shriner, being the stable foreman for the White Horse Patrol for more than 30 years.

Following his retirement, he continued to help a local farmer during planting and harvest seasons in the Jackson, Nebraska area.

Kenneth was a collector of toy tractors and lapel pins. He coached Little League baseball and was an avid sports fan. Kenneth also donated over 20 gallons of blood at the local blood bank.