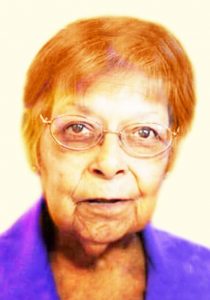 Services will be 10:30 a.m. Friday, April 26 at Mater Dei Parish-Immaculate Conception Catholic Church. Burial will be in Calvary Cemetery.

Visitation will be 4 to 7 p.m. Thursday, April 25, with a prayer service at 7 p.m., at Morningside Chapel, Christy-Smith Funeral Homes.

Mary Felista “Phyllis” Aguirre, the daughter of Juan and Felisita (Arciniga) Aguirre, was born on December 21, 1940 in Sioux City. She graduated from Central High School in 1959.

Phyllis then went to work at a clothing store in downtown Sioux City.

On November 14, 1964, Phyllis was united in marriage with John Coon at Immaculate Conception Catholic Church. She focused on raising her family, and was a devoted wife and mother.

In 1988, Phyllis went back to school and earned her LPN degree from Western Iowa Tech Community College in 1990. She was employed at Mercy Medical Center as a nurse, and also worked at local nursing homes.

Phyllis was a member of Immaculate Conception Church, the Catholic Daughters, and the Red Hat Society.

She coached T-ball when her children were little, and was also a Girl Scout leader.

She was preceded in death by her parents; three brothers; three sisters; and a grandson.