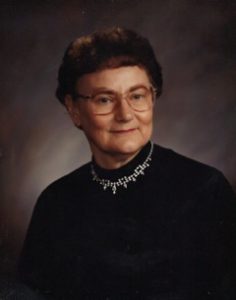 Ramona D. Carrington, age 90, of Johnston, formerly of Moville, passed away on Sunday, April 14, 2019 at Brio of Johnston.

A funeral service was held on Saturday, April 20, 2019 at 10:00 AM at the Rock Branch United Methodist Church of Correctionville with Pastor Dan Bjokne officiating.

Burial was at the Fairfield Cemetery (Rock Branch) of Correctionville.  Online condolences can be made at nicklasdjensenfh.com.

Ramona D. Carrington was born September 7, 1928, the daughter of Coy and Eva Knapp at Tyler, Minnesota.  The family moved to Iowa when Ramona was three.

She attended Morningside College for a short time.

Ramona was united in marriage to Duane “Bud” Carrington on August 27, 1950 at the Federated Church in Moville.  To this union three sons were born.

She and Bud lived on a farm until 1999 when they moved into Moville.   She was active at Rock Branch United Methodist Church, where she was a member.

She loved music and dance, and she belonged to the Elderbury Dance Group. She also enjoyed playing cards and golfing.

Ramona is preceded in death by her parents, Eva and Coy Knapp; her husband, Bud; and her brother, Ralph Knapp.