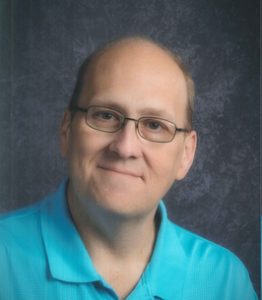 The Mauer – Johnson Funeral Home in Le Mars is assisting Doug’s family with arrangements.  Expressions of sympathy may be directed through www.mauerjohnsonfh.com

Douglas Scott Martin was born on March 11, 1967 in Wakefield, Nebraska to Roy and Lois (Corey) Martin.

He attended elementary and high school at Woodbury Central in Moville, Iowa, graduating in 1985.  During those years Doug always kept active with Boy Scouts and 4-H.

He first used his degree in education at South O’Brien High School where he put his love for the sciences to work.  He later taught in Mapleton before moving to Le Mars.

Doug’s passion for teaching and his students was evident by the groups he led and awards they earned.

Also close to his heart was his involvement with the Geared Up Robotics Club which has earned multiple achievements over the years.

He was also a member of the Iowa State Education Association on the local, state and national level.

He served on the board of the Iowa State Extension and, in his limited spare time, Doug enjoyed gardening.

Grateful to have shared his life is his mother, Lois Kloewer and her husband, Harold of Moville, IA; three brothers and their wives, Irv and Kelly Martin of Moville, IA, Matt and Tami Martin of Missouri Valley, IA and Jon and Maria Martin of Omaha, NE; sisters, Michelle Stovia and Melissa Cavalieri and her husband, Chris both of Papillion, NE; along with nieces and nephews, Jessica, Jordan, Ashley, Jacob, Anna and Abby.

He was preceded in death by his father, Roy in 1987; sisters, LeAnn Luck and Lori Martin; and his grandparents.

Memorials in Doug’s name may be directed to the Geared Up Robotics Club at Le Mars Community High School.